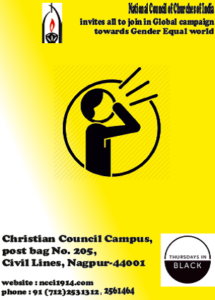 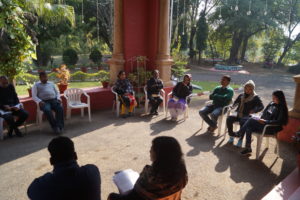 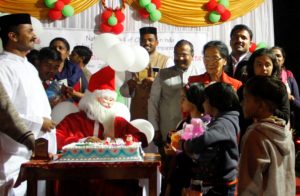 The National Council of Churches in India – Indian Disability Ecumenical Accompaniment organized “Christmas of  People with Disabilities” on  1st December 2018 at the NCCI Campus, Civil Lines, Nagpur. This is an annual celebration of the Children with Disabilities celebrating Christmas for others. This celebration is organized on the eve of the Advent (Christmas) Season every year, thereby setting off Christmas Celebrations in the city. 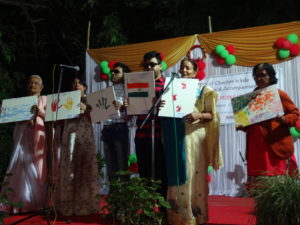 This celebration is to remember a child (Jesus) who was born during the cold winter in the wilderness of Judea as a migrant child.  His birth heralded glad tidings of great Joy to all creation; the joy of inclusion and social justice – the justice of bringing the wise men and shepherds together. Thus, began the Christmas celebration, in the NCCI campus, with a gathering of over 350 people including over 200 Children and People with Disabilities; it was  indeed a grand event. The children with disabilities and the persons with disabilities, who gave expression to the good news of the season, ornamented this celebration. The Children with Disabilities (CWD)  in particular, enthralled the audience with their dances, songs and enactments, through which they declared the Gospel of inclusion to the people present at the celebration. 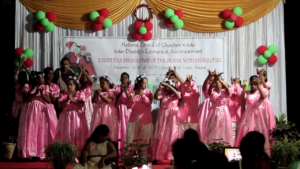 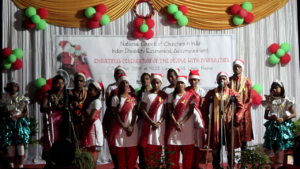 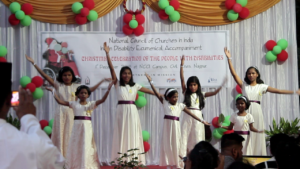 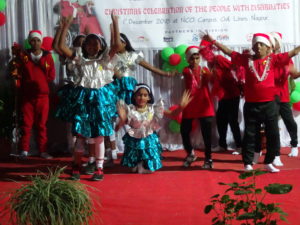 The Story of Christmas and the message on inclusions were articulated in a manner in which the Children with Disabilities understood it. They showcased an Autistic Joseph, a Down-Syndrome Mary, a Commodified Baby Jesus, and Santa on a Wheel-Chair. This radical yet conventional Christmas message intrigued the hearts of the ‘abled-audience’ who attended the Christmas Extravaganza. At the end of the program the CWDs and PWDs received gifts from the hands of the Santa on wheel-chair.

END_OF_DOCUMENT_TOKEN_TO_BE_REPLACED

The institute focused on the theme “Walking Together with People with Disabilities: Serving Justice, Peace and Inclusion.” This theme was highlighted from different viewpoints, such as Scanning the Disability Contexts from the societal, legal and medical perspectives as well as  from different faith perspectives, pondering on  questions such as: “How do religious scriptures address disability? How do the religions look at PWDs ? Are religious worshiping places accessible and inclusive? The Disability concerns  were also looked at from the struggles of the marginalized sections of society, through reflections on Caste and Disability, Gender and Disability and Indigenous views on disability. Another session  dealt with  bio-ethics and socio-spiritual ethics and disability. Further, the institute discussed about the educational, employment and social protection schemes related to PWDs and modern approaches to disability. There were times of sharing of faith stories by the PWDs and their siblings along with a session facilitating the participants to read the scriptures from the eyes and experiences of the PWDs.

END_OF_DOCUMENT_TOKEN_TO_BE_REPLACED 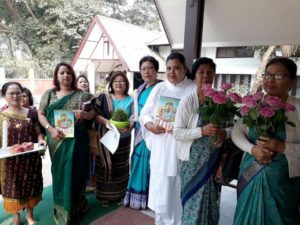 The Women’s Concern Ministry of National Council of Churches in India organized an  Ecumenical Consultation on Women Catalyst of  Change . This consultation was organized in partnership with Diocesan Women’s Fellowship of Christian Service (DWFCS), North East Diocese – Church of North India on 18th February 2018 in Christ Church , Guwahati, Assam.

60 women church leaders from Baptist Church, Church of North India, Presbyterian Church in India, North East India Council of Churches, and The Salvation Army from  different parts of Assam and Meghalaya  attended this Consultation. Prior to this consultation an Ecumenical Worship was organized  to commemorate World Day of Prayer (WDP) 2018 in Christ Church  from 8:30am – 10:00 am.  Women leaders  of DWFCS conducted the WDP worship reflecting on the theme ” All God’s Creation is Very Good”.

Drawing from the WDP resource material  produced by WDP Committee of Suriname, Rev Moumita Biswas  delivered the key message  about women’s power in protecting God’s created order . She cited contextual examples  about how taking care of wet lands can be  an  answer to climate change . Rev Biswas cited the example of 37 years  old women Purnima Burman of Assam who engaged women and villagers to protect  the storks or Hargila birds and  their nestling grounds the wetlands of Assam.  She also reflected how women in the North East India in state of Nagaland are practicing organic and contour farming  using indigenous skills to save water and prevent soil erosion . Such efforts have resulted improving women’s  living condition  and promoting food security.

END_OF_DOCUMENT_TOKEN_TO_BE_REPLACED

The National Council of Churches in India, keeping in mind the political scenario in Nagaland, on account of  the  upcoming state assembly elections which are to be held on 27th February 2018, appreciates the ongoing campaign of the Nagaland Baptist Church Council (NBCC) on Clean Election.

The NCCI urges all churches in Nagaland to continue to pray for peaceful clean elections, and also to encourage one another in ensuring that the upcoming elections will take place in an exemplary manner.

The NCCI also urges all political parties, NGOs  and civil society organizations in Nagaland to abide by the call made by NBCC and its suggestions for a clean and responsible election.

The appeal and the guidelines of NBCC are presented below:

No.1 – Letter to the Director General of Police

In view of the general election in the State related for early next year coming close, the need for  concerted effort from all concern, to usher in free and fair election, has become imperative and critical. We believe that strict enforcement of the NLTP Act in the state during the coming months will greatly strengthen  the Clean Election Campaign which is currently in motion.

We would, therefore, like to request you to direct all concerned law enforcing agencies under your kind authority to work together with Clean Election Campaign members and volunteers (Youth, Women, Students etc.) so as to stop illegal supply of liquor to towns and villages.

We look forward to your kind cooperation and support. Thank you.