Boycott, Divestment, Sanctions (BDS) is a Palestinian-led Movement for freedom, justice and equality. BDS upholds the simple principle that Palestinians are entitled to the same rights as the rest of humanity. (https://bdsmovement.net/what-is-bds). 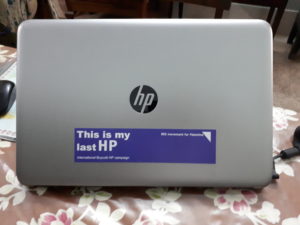 HP provides and operates much of the technology infrastructure that Israel uses to maintain its system of apartheid and settler colonialism over the Palestinian people. HP Enterprise is the prime contractor of the Basel system, an automated biometric access control system employed within Israel’s checkpoints and apartheid wall. These checkpoints fragment and segregate the Occupied Palestinian Territories and its residents through electric fences, watchtowers, sensors, and concrete barriers. The checkpoint system separates Palestinian workers from their jobs, farmers from their land, students from their schools, patients from hospitals, and families from each other.

The ID cards distributed as part of this system form the basis of Israel’s systematic discrimination against Palestinians. This ID system forms the part of the Israeli apartheid regime’s tiered system of citizenship that gives different rights to different people and leads to institutionalized discrimination in housing, employment, marriage, healthcare, education, and policing.

HP also directly contracts with the Israeli municipalities of Modi’in Ilit and Ariel, two of the largest Jewish-only Israeli settlements in the West Bank, providing them with a range of services.

HP technology helps the Israeli navy enforce the siege on Gaza. HP provides broad IT infrastructure and support services for Israeli occupation forces, particularly the Israeli Navy that maintains the siege on Gaza. Israel’s frequent massacres of Palestinians in Gaza and its siege are deliberately implemented to deny Palestinians their basic rights to life, freedom and self-determination, and to physically segregate them.

HP also provides services and equipment to the Israeli Prison Service (IPS), including providing and maintaining its central server system. Israel’s prison system is used to suppress Palestinian political activity, and to stifle opposition to its policies. By helping Israel run its prisons, HP is at the heart of Israel’s use of mass incarceration to undermine Palestinian opposition to apartheid.

According to Human Rights Watch, “the extraction of confessions under duress, and the acceptance into evidence of such confessions…form the backbone of Israel’s military justice system”. Each year, 500-700 Palestinian Children are arrested, detained and prosecuted by Israel. The ill-treatment of children imprisoned by Israel is “widespread, systematic and institutionalized” according to UNICEF.

THE CAMPAIGN AGAINST HP

As the coalition, Massachusetts Against HP, has noted, HP technology underpins oppressive practices across the world:

The campaign against HP was launched quite recently but has already achieved some important successes:

US churches divest from HP

More than 1.8 million people have signed a petition calling on HP to end its role in Israeli apartheid and settler colonialism. In 2014, 1,000 activists with the Boston for Palestine coalition marched on an HP conference. There is active campaigning on HP across the US, as well as in the UK and Italy. More than a dozen student governments in the US have called on their university to divest from HP.

In October 2017, the largest national organization representing farmers and agricultural workers in India, All India Kisan Sabha (AIKS), announced that it has joined the BDS movement. AIKS is spread across 21 states in India and is over 16 million members strong. (https://www.timesofisrael.com/communist-indian-farmers-join-boycott-israel-movement/)

AIKS has resolved to:

HP relies on its good image and its contracts with public organisations, civil society bodies and private businesses. Effective grassroots campaigning can push HP to end its role in Israeli apartheid and settler colonialism.

The Palestinian BDS National Committee is calling for a boycott of all HP consumer products including laptops, printers and printer ink. Ask consumers not to buy HP products and work with your local retailers to get them to deshelve HP products. 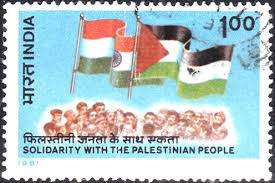 Indian stamp from 1981 expressing solidarity with the Palestinian people.

Individuals, churches and indeed all Indians in India are hereby encouraged to join this campaign against HP. In case you are using an HP paste a pledge on your HP, stating that this would be your last HP. You could think of other ways to express your commitment.