Migrants form the largest part of India’s vast unorganised work sector. Their entry into the labour markets is marked with several endemic disadvantages. Devoid of critical skills, information and bargaining power, migrant workers often get caught in exploitative labour arrangements that force them to work in low-end, low-value, hazardous work. Lack of identity and legal protection accentuates this problem. The hardships of migrant workers are especially magnified when state boundaries are crossed and the distance between the “source” and “destination” increases. In India, thousands of people including men, women and children mostly Dalits and Adivasis, are forced to migrate from their homes to other places because of poverty, unemployment, limited economic activities, landlessness, global warming, environmental calamities, failure in agriculture due to uncertain monsoon and floods, deforestation, political persecution, poor medical care facilities in their native place, forced displacement due to so-called developmental work, and so on. Keeping these things in mind NCCI-Dalit and Tribal/Adivasi Concerns in partnership with Vidarbha Centre for Labour Concerns and Bahujan Rangbhoomi (street theatre group) celebrated May Day with more than 200 various labour migrants as well as locals from the Butibori and Hingna (Maharashtra Industrial Development Corporation) MIDC area at Samvidhan Chowk (Constitution Square), Near Kasturchand Park, Nagpur on 1st May from 4:30 to 6:30 pm. This celebration was done through sharing of Experiences, Street Theatre performances, singing songs of Liberation and Expressions of social-workers. 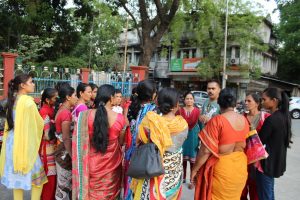 In his opening remarks Mr. Rajesh Jadhav (Coordinator- Vidarbha Centre for Labour Concerns) explained that the origin of May Day is indissolubly bound up with the struggle for the shorter workday – a demand of major political significance for the working class. This struggle manifests almost from the beginning of the factory system in the entire world. He also said that although the demand for higher wages appears to be the most prevalent cause for the early strikes in this country, the question of shorter hours and the right to organize were always kept in the foreground when workers formulated their demands against the bosses and the government. As exploitation was becoming intensified and workers were feeling more and more, the strain of inhumanly long working hours, the demand for an appreciable reduction of hours became more pronounced. 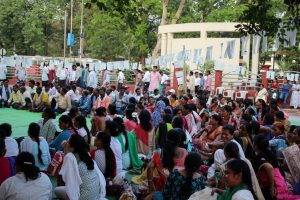 Mr. Pradip Bansrior (Executive Secretary- Dalit and Tribal/ Adivasi Concerns of NCCI) said that in our country, people earning 20 to 25 thousand rupees per month for their services  in factories, companies and corporate offices say proudly, “I am having a  job.” But they do not know that because of their hard work and diligence, capitalists like Ambani, Adani, Tata, Birla, Jindal, Mittal are getting richer day by day. Today, 70 percent of the people of the country have as much wealth as  67 wealthy tycoons possess in the country. One percent of the country’s people have occupied 53 percent of the country’s wealth and the Central and State governments try to entrust country’s natural resources – land, forest, mountains, water resources and minerals to these wealthy tycoons in the name of national interest, development, economic progress while the Constitution of our country promises to give us social, economic and political justice. Will we ever get social, economic and political justice? Is capitalism by any way beneficial to us? What is the definition of labour? Who is a labourer? Whose day is Labour Day? Is only a brick maker or a construction worker considered to be a labourer who works under the Sun? The reality is that we are all labourers, and capitalists are getting huge benefits by trapping common people in their systems. Among the worst victims are migrant labourers. To ensure social, economic and political justice for all the people in accordance with the constitution in the country and to bring equity in the country  capitalism has to be done away with. Dalit and Tribal/ Adivasi Concerns of NCCI considers it imperative that the situation of migrant workers in our contemporary context needs to be reviewed through in-depth study, analysis and solidarity in order to build a just society. 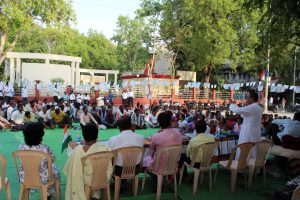 Dr. Roger Gaikwad (General Secretary- NCCI) said that we need to explore the magnitude of suffering and injustices that migration brings on individuals, families and communities. He gave examples of Jesus as migrant worker and shared the elements of his migration and his role as a liberator of people in bondages. He further said that we need to engage and experience the joy in joining hands to liberate migrants from slavery and bondage that they may be taking home the good news. Church needs to welcome migrant people with an open heart as majority of them are Dalits and Adivasis in their congregation; they need to be included in church activities and ministries. The Church needs to show concern for the rights of migrants and stand with them to overcome all discrimination based on race, colour, culture and religions. 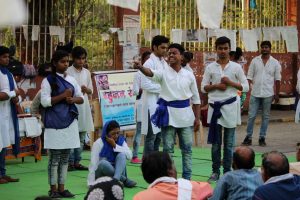 The main attraction of May Day celebration was the Street Theatre performed by “Bahujan Rangbhumi” on the theme ‘Achhe Din Aur Buri Raatein’. Through the street theatre they explained that it is high time to understand the groaning voice of  labourers in the context of the onslaught of Neo Liberalization. They also tried to convey the message that migrants can become easy victims of identity politics and parochialism. Despite the vast numbers of migrant workers, the policies of the Indian state have largely failed in providing any form of legal or social protection to this vulnerable group. Through their play they narrated the socio political reality of India and also highlighted the double standards of government policies. 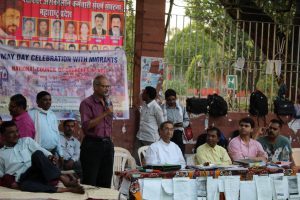 In the final remarks Mr. Jammu Anand( Social Activist/Worker) said that May Day is not a celebration of trade unionism only but of all humankind. It is not a conga-line of left-wing ragbags winding their way through the streets chanting slogans calling for the downfall of  capitalism. May Day, particularly in today’s world – where ordinary hard-working people are increasingly left bleeding on the economic roadside from collateral damages inflicted by the global recession – is about family, freedom, and a fair go. It is about empowerment in a world where individuals still too often have little control over their own destiny when it comes to the workplace.

NCCI- Dalit and Adivasi Concerns and VCLC also had an opportunity to be in solidarity with a group of activists from the organisation called PRAHAR led by the independent MLA Mr. Bachchu Kadu demanding for the farmer’s rights and para-teacher’s rights in wake of demonetisation and government policies. In a move aimed at stepping up pressure on BJP led government, group of activists were fasting at the Samvidhan square for past 10 days. We joined and shared their demand for farmer’s rights and para-teachers’ quest for identity.  May Day was meaningfully celebrated, as the sum and substance of our commitment along with the success and failure stories of the working class are moving us one step closer towards the  values of the God’s reign of justice. 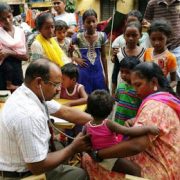 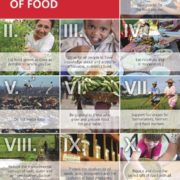 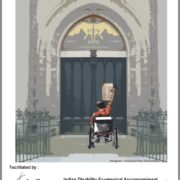 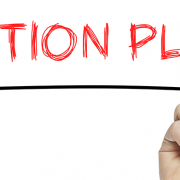 Statement condemning the Torture, Rape and Murder of a Dalit Woman Law Student in Kerala.
0 replies