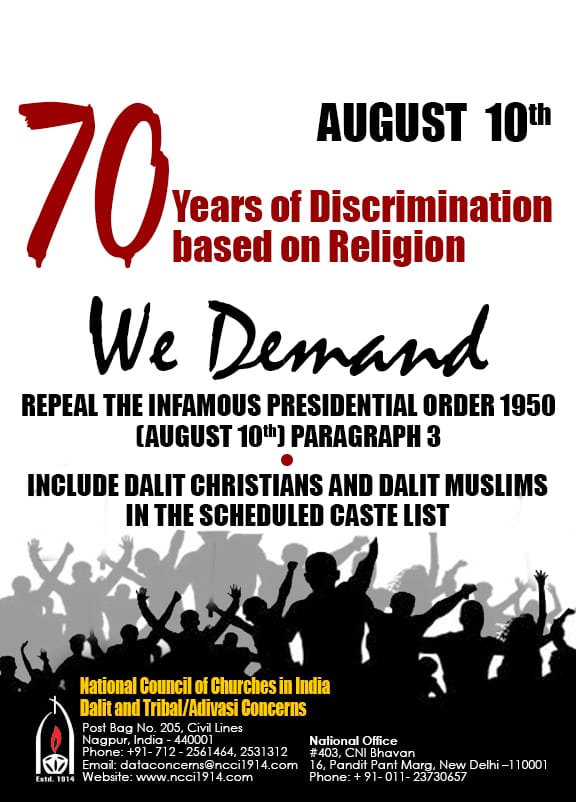 Dalit Christians and Dalit Muslims observe August 10th across the country as a day to highlight and protest the denial of the fundamental constitutional rights to them for the last seventy years!

When India became a Republic, we resolved as a nation to secure Justice, Equality, Liberty and Dignity for all our citizens. Members of castes worst affected from centuries of social oppression, the Scheduled Castes (SCs), were constitutionally assured special protection and affirmative benefits. These measures are necessary to help them overcome the effect of centuries of discrimination and oppression. The Constitution of India is a protector of democratic values, and articles 25 to 28 list provisions that ensure freedom of religion. Unfortunately, these fundamental rights have been denied to the Dalit communities converted to Christianity and Islam through the infamous Presidential (Scheduled Castes) Order, 1950. This privilege was extended in 1956 to Sikhs and in 1990 to Buddhists of dalit origin. Dalit Christians and Dalit Muslims continue to be kept outside this privilege.

Approximately 70% of the Christian population in India are from Scheduled Caste backgrounds. Dalit Christians have a unique history of faith experiences because of their caste identity. They embraced Christianity as a faith affirmation against caste slavery and these experiences vary according to regional contexts. It is not only common knowledge but also borne out of numerous extensive research studies that the Dalits are unfortunately still identified first by their caste by a large section of the Indian society. All their other identities, arising from their religious, regional, linguistic and other affiliations are secondary identities that do nothing to displace the severity of the caste-based discrimination and violence that they suffer.

Followed by the decades long mass struggles and advocacy initiatives, finally a Writ Petition (180/2004) was filed in the Supreme Court of India by the Centre for Public Interest Litigation challenging the Presidential (Scheduled Castes) Order, 1950. The Writ Petition is also looking for justice from the apex court to allow and extend the Scheduled Caste status to Christians of Scheduled Caste origin for availing special privilege in education, getting scholarships, employment opportunity, welfare measures, affirmative actions, right to contest in the reserved constituencies from panchayat, legislative assemblies up to the Parliament and for availing the legal remedy/protection under Scheduled Castes and Scheduled tribes (Prevention) of Atrocities Act, 1989 amended in the year 2018.

On January 7th 2020, The Supreme Court agreed to examine the plea filed by Adv. Franklin Ceaser Thomas that Dalit Christians or Christians of Scheduled Castes origin should enjoy the same quota benefits reserved for Scheduled Castes. A bench led by Chief Justice of India Sharad A. Bobde issued notice to the central government that reservation for government jobs and admissions in education institutions should be made “religion neutral”. The Civil Writ petition is pending before the Hon’ble Court for further hearing. The 70 years of  struggle for justice should be supported by the people who believe in equality and democracy. The Supreme Court has a monumental opportunity now to render justice to millions of Dalit Christians and Dalit Muslims who continue to suffer from social stigma and the horrors of untouchability.

We await Justice with earnest faith in God

NCCI Webinar on Dalit Christians: 70 years of discrimination based on relig...