‘Nagpur Chalo March’  gathered more than 3000 women from different parts of India on 10th March 2017 in Indora Maidan, Nagpur. Women from Dalit, adivasi, bahujan and minority communities, women from different faiths disabled, queer women, transgender people, sex workers, nomadic tribeswomen, students and many others discriminated against on the basis of caste, class, religion, community, sexuality, gender, disability, occupation or age came together to raise their voices against the forces of communal, brahmanical, feudal, casteist, capitalist patriarchy on 10th of March 2017. International Women’s Day on March 8th 2017 geared up women different parts of the world to protest against fascism, racism, discrimination, intolerance, hatred. Fascism is increasing in the world today which is fueling heinous crimes and breeding culture of violence. There are  countless cases of heinous gendered and sexual crimes by dominant castes upon Dalit girls and women of minority communities in India . Women’s and girls’ bodies have become battlefields where caste and communal wars of hatred are being fought . Rape has become an instrument to revenge, creating terror and shaming communities.

Through creative expressions songs, dance, art, poetry and theatre, women in this gathering  confronted  inequality, intolerance and the efforts to silence cries of justice against violence  that are growing all around – in villages and urban centres, on university campuses and at work-spaces, in homes and on the streets.  Women shared their testimonies. Radhika Vemula , Rohith Vimula’s mother shared her quest for justice for many like her son. ( Rohith Vemula a Dalit  scholar, activist, student leader who was pursuing  PhD  in Hyderabad University  became  an innocent victim of caste discrimination and committed suicide .)

This is a historic event in the Women’s Movement in India as  it  commemorated the 120th Death Anniversary of Krantijyoti Savitribai Phule,  renowned Indian woman teacher, poet, writer of the 19th Century . She  was the leading champion of women’s rights, who sounded a clarion call against Brahmanical casteist patriarchy in the 19th century. Savitribai Phule  made efforts to  educate shudras ( low caste people ) and women, and exposing the hollowness of the Manusmriti, religious texts and Brahmanical social practices. Savitribai boycotted traditional restrictions imposed on women, and set them on the path to freedom.   She intrigued society and women to raise voices for justice, friendship, peace, freedom, equality and dignity. 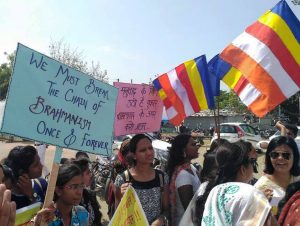 At the Nagpur event, women leaders openly condemned heinous gendered and sexual crimes by dominant castes and the state upon Dalit girls and women like Surekha Bhotmange of Khairlanji, Delta Meghwal of Rajasthan, the girls of Bhawana, Jisha from Kerala; adivasi women like Soni Sori of Bastar, 12 adolescent adivasi girls of Buldhana, the women of Bijapur; Muslim women of Mewat and Muzaffarnagar, rape of nuns in Raipur , West Bengal and demanded for justice  and immediate end of such atrocities and violence.They demanded for the protections guaranteed to us by the Constitution.  They asserted that in a secular country no one has the right to discriminate, humiliate, violate, oppress, or commit atrocities against any person or community based on their identity.Christian women leaders also participated in this historic event.

The National Council of Churches in India promotes the 365 Days Zero Tolerance to Gender Based Violence: Make it Happen Now!!! Campaign to end the culture of gender based violence within our own homes, communities and societies.