On the 6th August 2017, the All Saints Cathedral celebrated the Tribal and Adivasi Sunday. Rev. John George the Priest in charge led the service as per the order of worship provided by NCCI. The message was brought by Mr. Mathingmi Hongchui, Intern of Dalit and Tribal/Adivasi (DATA) Concerns, NCCI. The speaker  drew attention to the problems faced by Tribal and Adivasi communities since antiquity. Prayer alone is not enough in today’s context; it is imperative  to speak up for the voiceless and ensure justice for those who are poor and needy, which is the need of the hour. The message was concluded with a quote of John Stott, “To be a burden-bearer is a great ministry. It is something that every Christian should and can do. It is a natural consequence of walking by the Spirit. It fulfills the law of Christ.”

The United Theological College, Bangalore conducted Tribal and Adivasi Sunday on 6th August 2017. Many of the student friends hailing from various parts of the country led, and participated together in, the worship. The chapel had a tribal setup with symbols, images, and songs reflecting  Tribal culture. Dr. Rini Raite brought the message basing on the theme, “Solidarity in Christ: Bearing one Another’s Burdens.”

Eastern Theological College observed Tribal and Adivasi Sunday and ETC Prayer day on the same day.  The Message was brought by Rev. Dr.  Razouselie Lasetso, Prof. of New Testament. The community followed the Worship Order sent by NCCI, led by Ms. Chin Yee. Through the worship service, the community which is comprised of more than 40 tribes was enlightened and  made to realize the presence of the God of all tribes in all our struggles and hardships at the hands of  oppressors. It is hoped and believed that our God will liberate and bring justice and peace in our land.

Trinity Theological College observed Tribal and Adivasi Sunday on  6th August 2017 on the theme “Solidarity in Christ: Bearing one another’s burdens.” To make it contextualized meaningful, the chapel decors were embellished with  traditional artifacts of the tribals, from attires to kitchen wares, and tools to dried flowers. The community dressed in traditional attires to identify ourselves as tribals. The entire worship was marked by mass participation. The sermon was delivered by Mrs Skyli Achumi, Lecturer, expositing the theme as burden sharing and bearing, which is the Christian responsibility enacted through love that God has bestowed on all. The worship as a whole was a reminder of God’s love to all humankind, and further realization of our responsibilities to God in caring for all creation. 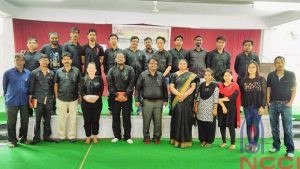 The college celebrated August 6, 2017 as  Tribal and Adivasi Sunday. The message was brought by Dr. Machhungi Hrangthan. It was a call for “Solidarity in Christ: Bearing One Another’s Burden.” An invitation to be another ‘willing Simon, to carry the burden of the Tribals and Adivasis in our struggles today just as Simon had carried the burden of Jesus’s Cross on the way to Calvary. The college was so thankful to Rev. Billy Lalrinchhana and the Christian Youth Fellowship of the Mizo Presbyterian Church of Hyderabad for participating in the celebrations with their beautiful song and  “Chheihlam” dance. The North East community of MBCBC family was thankful to the College Principal Rev. Dr. IP Asheervadam, the SCM-MBCBC, the students team Mr.Gunti Arun and his friends for their wonderful arts and creativity giving a beautiful ambiance to the place , and the whole community for their enthusiastic participation and appreciation of the whole programme.

Tribal & Adivasi Sunday was observed on August 6th, 2017 by the Methodist Church in India, Pakur district at Paikpara. Around 3000 people from all the Churches of Pakur District Churches (mostly MCI along with CNI & NELC) gathered together  to observe the Day. Rev Emmanuel Chitrakar, District Superintendent, Pakur District MCI was the main Convener of the event. THe local MLA Mr. Simon Marandi of CNI was also present. Office Bearers & Deaconesses of the Bengal Regional Conference participated actively to express solidarity with the congregation. Rev. Roshan Hansdak, Treasurer of the Santalia Council of Churches represented the Council in this important event.

The NECF, Nagpur along with the NCCI observed the Tribal and Adivasi Sunday on 13th August 2017. The order of worship prepared by the DATA Concerns NCCI was followed. On the basis of the theme, Mr. Mathingmi Hongchui shared the difficulties and atrocities faced by these tribals and adivasis. He explained why it is important to educate and sensitize  other sections of people so that we all live in harmony without discrimination and injustices. Everyone had a blessed time of worship and a moment of deep realization and better understanding of our identity.

Tribal and Adivasi Sunday was observed in the Mennonite churches on August 13th and 20th. Worship material provided by NCCI was translated into Hindi and distributed among the churches. Church members belonging to  tribal communities led the worship along with the Pastors. The challenges faced by the community were shared, and through slide shows,  facts and figures were displayed. The members responded by asserting that they will raise voices against persecution of Dalit and Adivasi communities. It is our humble prayer that churches will continue to support and stand with our Dalit and Adivasi brothers and sisters in times of difficulty. 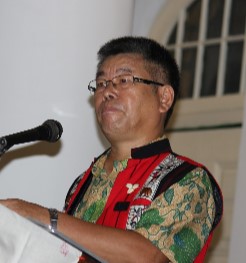 Bishop’s College Kolkata celebrated Tribal and Adivasi Sunday on August 20, 2017. The guest speaker, Rev. Dr. A. Wati Longchar, Yushan Theological College & Seminary, Taiwan spoke on the theme, based on the story of Naboth in I Kgs.21. The speaker stressed that just like the collaborative action of Jezebel, nobles, villagers and scoundrels in murdering Naboth, people in power and the rich collaborate with each other to oppress  tribals/adivasi in India in the name of development and national integration. Forced land grapping, denial of culture, language and spirituality is taking place openly. Mere observance of a Sunday in a year is not enough when systematic human rights violation, land alienation, marketization and objectification of tribal and adivasi culture is taking place. Solidarity is  power. It involves sacrifice. It is not looking at someone from a distance but standing together, extending one’s hand and walking together in favour of tribals and adivasis. Their voices of justice are not only for them, they are not protecting their land rights and cultural rights alone,  but they are a call for justice to all creation and to respect the diversity of all creation. 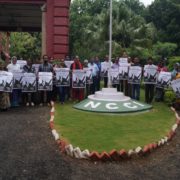 A Moment of Introspection and Reflection

Prophetic role of Church leaders in the midst of injustices: A Biblical ins...
Scroll to top