The Nakba commemoration of 71 years was jointly organized by National Council of Churches in India – Dalit and Tribal/Adivasi Concerns, Urban Rural Mission and India Peace Centre on 15th May 2019 at India Peace Center. People from various walks of life, from different faith communities participated to understand the complex reasons responsible towards the mass exile of the Palestinians from their land which now is under the captivity of Israel. Mr. Rajesh Jadhav working with NCCI -Urban Rural Mission explained in brief the historical background of NAKBA by giving details of the Israeli Zionist thought process in the Exodus and occupied areas of Gaza strip. Followed by the introductory speech a short documentary movie “The Walls of Shame” was screened which highlighted the burning issue of human rights and American right-wing approval for this endeavor. The movie depicted the reality which the people of Palestine have faced since decades in the hands of Israel and its inhuman strategies against a particular faith community. 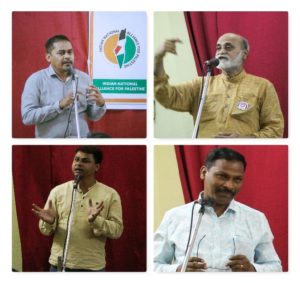 Followed by the movie Mr. Pradip Bansrior, Executive Secretary of Dalit and Tribal/Adivasi Concerns – NCCI highlighted the issues existing in the Indian society and about the invisible wall which is present in the Indian society in the form of caste system and its practices. In between, the Muslim friends offered the sunset prayer Namaaz commemorating the Holy month of Ramadan after which they break their fast with Iftar.  Dr. Suresh Khairnar, National President of Rashtra Seva Dal, Nagpur shared and brought insights and his experiences which he had during his visit to the Gaza strip and Palestine. Dr. Khairnar in his address spoke extensively on the problems faced by the people living at the borders of Israel and Palestine and the key issues which are mutual recognition, borders, security, water rights, control of Jerusalem, Israeli settlements, Palestinian freedom of movement, and the Palestinian right to return. Dr. Khairnar was eloquent in bringing out the how the world media is reluctant towards the problems faced by Palestinian. 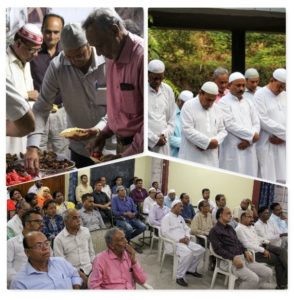 He appealed and encouraged the participants to read the book Good Muslim, Bad Muslim written by Mahmood Mamdani in order to understand the degree of suppression, distress and violence the people from the Muslim communities go through in their daily life.The program was concluded with the final remarks on standing together and striving for a justice oriented community and society by large was given by Rev. Kasta Dip, Director of India Peace Centre after which Mr. Rajesh Jadhav proposed a vote of thanks to all the delegates and the organizers of the program and proposed special thanks to Mr. Moses Gaur and Mr. Saurabh Khobragade. This was yet another opportunity wherein the National Council of Churches in India once again stood in strictly objecting the violation of human rights done by Israel in the case of Palestinian and affirming that it stands for peace, justice and love which Christ Jesus commands to share with every human being and the whole creation at large.

NCCI received this email letter (as reproduced below) from Rev. Josef Purnama Widyatmadja with an article on “Spirituality behind Bar” which is an interview of Rev. Sugianto, a local Pastor in Indonesia who is engaged in the defence of people whose lands have been grabbed by a big corporation.

Messages of Solidarity have been sent from around the world. Rev. Dr. Roger Gaikwad, General Secretary of NCCI has also written a message of solidarity which is appended to the other messages listed below the interview.

Hope you are fine

By the way ,  enclosed I send you an article on ” Spirituality behind Bar “. This is an interview between Rev Sugianto and Ms. Henriette Johana Niuewenhuis , wife of Rev Karel Barus  a local pastor in Tulang Bawang Lampung South Sumatera Indonesia. I spent one week from 8 t0 13 Febuary 2017 in Lampung to visit detainees peasants and Rev. Sugianto, a local pastor who defended the  people whose their lands have been grabbed by BNIL a big corporation. I went to Lampung to be a witness and  to give my testimony in tribunal trial. I gave my testimony on  The scope of Church mission and the vocation of ordained pastor. In my testimony I confess that the mission of Christian mission is not limited within the wall of church building. Christian mission and vocation of pastors must respond to also the cry of poor . Proclaim the good news to the poor and oppressed are the obligation of christian mission throughout history. I cited also ths story of Toyohiko kagawa, Martin Luther King Jr,  Desmond Tutu, Van Lith and local pastors from Indonesia such as in Mangkid North Sulawesi, Asahan in North Sumtera and Kedungombo in Boyolali..