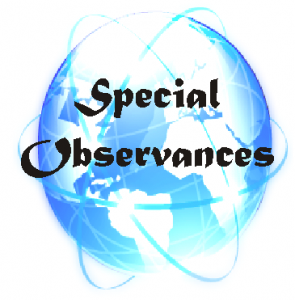 The International Day of Human Space Flight , which is also Cosmonautics Day in Russia and other countries, is the annual celebration, held on April 12, of the anniversary of the first human space flight by Yuri Gagarin.

World Creativity and Innovation day observes on April 21 across the world and the goal is to build capacity for everyone to be open to new ideas and to make new decisions that make the world a better place and make their place in the world better too, in ways that do not cause harm.

International Mother Earth Day is celebrated to remind each of us that the Earth and its ecosystems provide us with life and sustenance. It also recognizes a collective responsibility, as called for in the 1992 Rio Declaration, to promote harmony with nature and the Earth to achieve a just balance among the economic, social and environmental needs of present and future generations of humanity.

World Book Day or World Book and Copyright Day (also known as International Day of the Book or World Book Days) is a yearly event on April 23rd, organized by the United Nations Educational, Scientific and Cultural Organization (UNESCO), to promote reading, publishing and copyright.

UN English Language Day is observed annually on 23 April. The event was established by UN's Department of Public Information in 2010 "to celebrate multilingualism and cultural diversity as well as to promote equal use of all six official languages throughout the Organization.

World Malaria Day  is an international observance commemorated every year on 25 April and recognizes global efforts to control malaria.

World Intellectual Property Day is observed annually on 26 April. The event was established by the World Intellectual Property Organization (WIPO) in 2000 to "raise awareness of  how patents, copyright, trademarks and designs impact on daily life" and "to celebrate creativity, and the contribution made by creators and innovators to the development of societies across the globe".

World Day for Safety and Health at Work

The World Day for Safety and Health at Work is an annual international campaign to promote safe, healthy and decent work. It is held on 28 April and has been observed by the International Labour Organization (ILO) since 2003.

Day of Remembrance for all Victims of Chemical Warfare

The Day of Remembrance for all Victims of Chemical Warfare is an annual event held on April 29 as a "tribute to the victims of chemical warfare, as well as to reaffirm the commitment of the Organization for the Prohibition of Chemical Weapons (OPCW) to the elimination of the threat of chemical weapons, thereby promoting the goals of peace, security, and multilateralism." It is officially recognised by the United Nations (UN) and has been celebrated since 2005.

The International  Dance Day is celebrated every year on 29th April. The main purpose of Dance Day events is to attract the attention of the wider public to the art of dance. Emphasis should be given to addressing a new public, people who do not follow dance events during the course of the year. Every year, the president of the International Dance Council sends the official message for Dance Day which circulate in every country around the world and is…