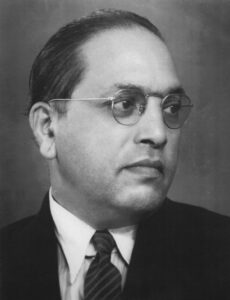 The National Council of Churches in India salutes the legacy of a legend Babasaheb Dr Bhim Rao Ambedkar, a celebrated National leader and the architect of the ‘Constitution of India’, a legal luminary, icon and champion of the annihilation of caste, who worked unequivocally confronting the inequality, injustice and discrimination that prevailed in the country – and primarily caused by the caste system. Babasaheb believed in a religion that taught liberty, equality and fraternity. He measured the progress in a society by the degree of progress that women have achieved.

We recall his conviction that political clarity and administrative reforms alone cannot shape a country like India that is so distinct in culture and social reality. He believed that the annihilation of caste is the determining principle to achieve political and social liberation. He guided the Indian minds in liberation through spiritual development.

We recall that to achieve his central aspirations Ambedkar tried to endow the Dalits with a glorious history of sons and daughters of the soil to help them to acquire an alternative identity, not caste-based, in order to regain self-respect and overcome divisions. His perspective of the status quo was not just settling with being subjugated, rather wanting more life, equality, freedom, fellowship, love and justice. His ambitions to achieve this liberation never ended until his last breath. Dr. Ambedkar was a reformer whose legacy and persistence lasts. His intelligence of social equality continues to echo and vibrate with the prevailing time.

Despite challenge from a personality like Babasaheb, Dalits are still killed, beaten, abused, prohibited from entering religious places, administering religious organisations and institutions, and officiating over religious ceremonies and attending mass ceremonies, using common utilities and resources and working alongside the people of other castes.

It is fitting tribute to the legend today when the NCCI collective, its member churches, councils, institutions, agencies and related bodies, mutually challenge and encourage each other to collectively commit in all its ministries and conversations, including in the interpretation of the Bible, to the fulfilment of Babasaheb’s dream of a just and casteless India; an India in which patriarchy is denounced, privilege of caste, colour, creed and class nexus called out,  and power rest in the collective socio-political consciousness of the people.