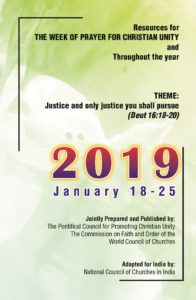 Every year Christians across the world gather in prayer for growth in unity. We do this in a world where corruption, greed and injustice bring about inequality and division. Ours is a united prayer in a fractured world: this is powerful. However, as individual Christians and communities, we are often complicit with injustice, and yet we are called together to form a united witness for justice and to be a means of Christ’s healing grace for the brokenness of the world.

The theme for the 2019 Week of Prayer for Christian Unity, “Justice and only justice you shall pursue”  is taken from the book of Deuteronomy 16:18-20.

The Week of Prayer for Christian Unity 2019 has been prepared by Christians from Indonesia. With a population of 265 million, 86% of whom are reckoned to be Muslim, Indonesia is well known as having the largest Muslim population of any country. However, about 10% of Indonesians are Christian from various traditions. In terms of both population and the vast extension of the country Indonesia is the biggest nation in South East Asia. It has more than 17,000 islands, 1,340 different ethnic groups and over 740 local languages and yet is united in its plurality by one national language Bahasa Indonesia. The articulations on the prayer themes have however been adapted to the Indian context by the NCCI Secretariat.

Churches all over the globe are called to work together to heal the wounds in the body of Christ. At the same time, need to discern God’s hand at work in bringing about reform, healing and liberation. In other words, churches should be together and work where God is. 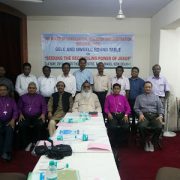 Paris Terror and Tragedy: Crying in solidarity! Calling for peace with justice! 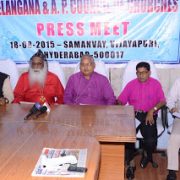 Passing the Baton: Revd. Asir Ebenezer takes charge of NCCI as the General ...

NCCI invites all to be a part of Global Campaign “Thursday in Black&#...
Scroll to top