Christians in Madhya Pradesh have recently been passing through a very difficult period. Besides the arrest and harassment of innocent Christmas Carol singing Priests and seminarians in Satna just before Christmas, fundamentalist forces had set their eyes on St. Mary’s P.G. College, Vidisha.  For the past few weeks, the ABVP, the Sanathan dharma and other like minded organizations have been threatening to forcibly perform “The Aarti of Bharat Mata” in the college Premises. On 30-12-2017, a violent mob of 60-70 persons jumped over the walls despite the presence of some 20 policemen and attempted to forcibly perform ‘Bharat Mata ki Aarti’. They threatened the Director Fr. Shaiju Devassy that they would return on 4th January and perform the Aarti at all costs and that should Father refuse to do it, they would put a garland of shoes around his neck and make him perform it.  Meanwhile, the SDM of the area had already denied these groups permission to perform the Aarti. Despite this order, on 4-1-2018, true to the threats, a larger and virulent mob of over 700 persons from outside the college again attempted to forcibly enter the college premises and perform the Aarti.  The Staff of three institutions in the campus which provide education for over 9,500 students unanimously agreed with the Director that the action of aarti is neither needed nor permissible in the campus. Bowing to mobs would endanger the running of the institutions and was not good for our democratic way of life, they felt. The Union Home Ministry, the Madhya Pradesh State Government and the State as well as the local Police acted effectively, efficaciously and provided full protection to the College, its staff and students.

Thereafter, the Director of the College received threats that even larger number of people would gather to forcibly enter the college on 16-1-2018 to perform the aarti, which is against the rights of the institute to administer and manage its affairs and also against the right to freedom of religion. Various offensive posts against the College management instigating others to join the mob on 16-1-2018 were circulated on social media through Facebook and Whatsapp.

On account of the threat to life to management, teachers, students and the constant disruption and as no FIR was registered against the previous assaults, authorities of St. Mary’s College were constrained to file a Writ Petition before the Madhya Pradesh High Court seeking protection of their Constitutionally guaranteed rights and against forcible attempt to perform the aarti in the college premises on 16-1-2018.

The matter was taken up by the High Court on 15-1-2018. At the hearing the Additional Advocate General assured the court that the State will provide protection to St. Marys College in Vidisha against any unruly elements seeking to forcibly enter the college premises. It was also assured that adequate police personnel would be deployed and strict action would be taken against any persons attempting to take the law into their own hands.

Meanwhile, Catholic Church leaders also sent letters of appeal to the Union Home Minister Shri Rajnath Singh, Shrimati Sushma Swaraj, Union Minister for External Affairs and Member of Parliament representing the Vidisha Parliamentary Constituency, Shri Amit Shah, President of the BJP and Shri. Ram Madhav, the National General Secretary of the BJP and former member of the National Executive of the RSS requesting them to use their good offices to bring sanity to the area represented and ruled by their party.

We are pleased to say that as assured by the Additional Advocate General in the High Court, the State has acted fairly and taken measures to provide protection to the institution at Vidisha on 16-1-2018. A police contingent of 500 police personnel placed barricades and intercepted the trouble makers. The police also took into preventive custody thirty two potential trouble makers.  On account of the decisive police action, the mob was unable to carry out their desired plan. It is our expectation that the Constitutional principles followed by the Administration in Vidisha and in the State of Madhya Pradesh protecting the constitutional rights of the Institution will be replicated and consistently followed by all the District Administrations in the State of Madhya Pradesh and other states where Christians are threatened.

In view of the support from the Union Government, the State and local administration in protecting the Constitutional rights, preventing any untoward incident in the college on 16-1-2018, and taking strong action against the trouble makers, St. Mary’s College has decided not to continue with its petition before the Honourable High Court of Madhya Pradesh. The Writ Petition has accordingly been withdrawn.

We express our gratitude to the Union Home Minister Shri Rajnath Singhji, the Chief Minister of Madhya Pradesh, Shri Shivraj Singh Chauhan and all leaders who showed both the political will and courage to protect our constitutional and democratic rights.  We are especially grateful to the State administration, police and other authorities for providing protection to the College and taking necessary action against the miscreants. We also hope that in a similar manner all the District Administrations will act in consonance with our Constitution and prevent indiscriminate groups from taking law into their own hands and thus creating disharmony in the society. After the protection received, our staff and students feel relieved and wish to continue peacefully with the task of teaching and learning entrusted to them. 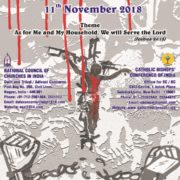 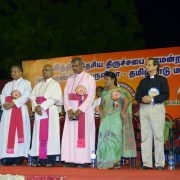 10000 Gathered in Madurai, Tamilnadu to Celebrate The NCCI Centenary