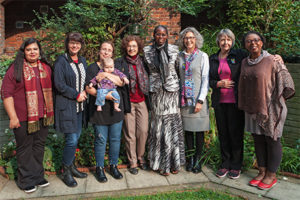 The Steering Group for the International Anglican Women’s Network (IAWN) met in London from 16th – 21st October to discuss the many issues facing women throughout the world. These women used theological and biblical perspectives to discuss far reaching issues such as gender-based violence, human trafficking, and sustainable economic empowerment.

According to Revd. Terrie Robinson Director for Women in Church and Society of Anglican Communion  “IAWN’s purpose is to be a bold and prophetic voice for all women throughout the Anglican Communion working to uphold the God-given dignity of women and girls, to eradicate gender-based inequality and violence, and to promote just relationships among all people.” The IAWN steering group revisited and refreshed its priorities. The group is in regular contact online but strives to meet in person once during each three year cycle. Terrie Robinson describes this as a “unique opportunity”, saying that the face to face environment allows them to plan strategically for the years leading up to the next ACC meeting.

According to Moumita Biswas ( from Church of North India,  and Executive Secretary of Women’s Concerns, National Council of Churches in India) an IAWN Steering Group member from Asia,  “This meeting will have great  potential for wide reaching impact, particularly when the stories and strategies are communicated in provinces. And not only within the Communion but we also do networking with other organisations like the World Council of Churches, the Asian Church Women’s Conference, the Christian Conference of Asia – so there is wider ecumenism that [this] Anglican network could have an impact on”. Biswas further states that “Church of North India and Church of South India, which are members  of the National Council of Churches in India, also belong to Anglican Communion. So Women’s Concerns Ministry of NCCI will also promote the Gender Justice Agenda of IAWN among CNI and CSI and share it with  women’s fellowships of other member churches.”

During their meeting, the Steering Group agreed to facilitate the design of a theological curriculum and signpost resources on gender-justice, to respond to gender-based violence, and to work with the Anglican Communion Environmental Network (ACEN) to promote aspects of climate justice in areas which have a disproportionate impact on women and girls, such as water justice. Along with Revd Terrie Robinson,  Dr Paula Nesbitt and Moumita Biswas are  part of the core  team to facilitate in designing  theological curriculum on Gender Justice.

IAWN will also promote the  Anglican Consultative Council’s Resolution 16.02, agreed last 2016 in Lusaka, which called on the provinces of the Communion to work at “empowering girls and boys, women and men to live and work in relationships that reflect Christian values of love, dignity and justice.” They will particularly focus on how liturgies and contextual Bible studies, and preparations for baptism, confirmation and marriage, “can serve in the promotion of right relationships and inter-generational teaching about the God-given dignity and status of all persons.”

The steering group chair, Pumla Titus from South Africa stressed the importance of this meeting in order to prioritize its efforts for the next two years. The Archdeacon of the Northern Region in Auckland, New Zealand, Carole Hughes Steering Group Member of IAWN emphasized that the meeting was critical for the women’s relationship with each other. 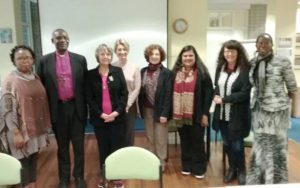 The Priority Foci of IAWN are –

( Photo and some information source ANS News Service  and www.anglicannews.org )