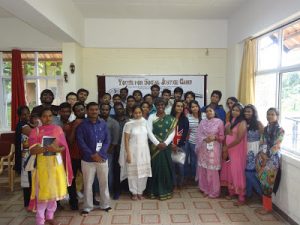 The NCCI-Commission on Youth successfully organized the Youth for Social Justice Camp at Visthar, Bangalore from 3rd – 7thAugust in partnership with NCCI-Commission on Justice, Peace and Creation, International Justice Mission and Visthar. The five days camp was allocated with different social problems – Trafficking, Sexual Minorities, Child Rights and Disability.

The camp was inaugurated with a welcome address by Rev. Sweety Helen, Executive Secretary of Commission on Youth-NCCI, who gave a brief introduction about the Camp and sessions of the program which are going to be conducted throughout the Camp i.e. on Sexual Trafficking, Gender, Disability, Child Abuse and Sexual Minorities. The first day was apportioned with the theme on Trafficking. After the inaugural session, Rev. Helen conducted the Bible Study from Luke 4:18 about the proclamation of good news, recovery of sight and freedom to the oppressed. The ted talk video of Ms. Sunita Krishnan, on Child Trafficking encompassing the lives of children who were trafficked for commercial sex work and were found in the most awful manner. This ted talk made people realize that trafficking is a real and a big issue in India. The introduction session was carried out by Rev. David Selvaraj, Director, Visthar, with a game and later an interactive with thought provoking points. He emphasized mostly on criminal and social justice, i.e. retributive and restorative justice. The first session was conducted by Mr. Shantanu Dutta, Director of Public Engagement, International Justice Mission, he elaborated on the topic of trafficking which includes not only sex trafficking but organ trade and bonded labour by deceiving people showing opportunities to grow and also showed some documentaries getting the participants deep into the issue which was followed by an interactive session with Ms. Erin from IJM. In the evening an ice breaker session was organized where the participants got to know about the other and were divided into four different groups namely Othniel, Deborah, Jephthah and Gideon. In the evening, vesper was led by Team Othniel.

The second day with a theme on Sexual Minorities and Gender started with a Bible Study conducted by Rev. Ruben Manohar, MTh, The United Theological College, Bangalore, focusing on gender issues, a crisis between Hagar, Sarah and Abraham from Genesis 16. The passage was shown in a different perspective to question the youth if was that fair enough and justified. The session on knowing oneself and knowing better on the gender was led by Rev. Helen. The introduction on sex-gender-minorities was given by Ms. Akkai Padmashali, founder-member of Ondede and her group. It was quite challenging for all the participants realizing them the social realities towards the sexual minorities. In the second session on Sexual Minorities Ms. Akkai further led the critical analysis on knowing the sexual minorities, what they want, what they are and why they demand for an identity. The social treatment and their personal experiences were shared and how they are victimized by the society which claims to be democratic and just for all. Later Mr. Santosh Karthik who is a gay, Ms. Shanti who is a transwoman and Ms. Pushpa who is a bisexual shared their testimonies which were brainstorming for the participants helping in knowing them and their feelings which are no different from the heterosexuals. Seeking for dignity and respect from the society which they deserve to get are the most desired among the sexual minorities. Most participants found them to be strange before but later the feedback from all was quite positive and respectful towards them. The vesper, in the evening was led by Team Deborah.

The third day with a theme on Child Rights was started with a Bible Study led by Rev. Christy Gnanadson, MTh, The United Theological College, Bangalore, considering about Child Rights with biblical context comparing the incident of Abraham sacrificing his son Isaac and Jephthah sacrificing his daughter and Jesus blessing little children in Mark 10:15 and Mathew 19:13. The topic was bought forward with a different approach about their stories. In the morning session, Mr. Raja, popularly known as Auto Raja, founder of New Ark Mission, conducted a session on the practical implication of Youth for Social Justice. He showed his work documentary encompassing the lives of distressed destitutes whom he has rescued and also shared his testimony of life how he started his journey. Many participants were moved by his documentary. The session was followed by some creative activities by the participants. The introductory session on Child Rights was carried out by Mr. Satya Rabbin Das and Mr. Jianthaolung Gonmei. Later there was a sharing session with a Sri Lankan group of girls with the topic on Spirituality in which Rev. Helen led the session. The afternoon session was on Child Rights by Ms. Brinda Adige, Director of Global Concerns India. She gave a brief statistical analysis of Child Rights. She enlightened the participants and challenged that in Indian ethos one must take courage to make personal and professional commitments to make children live in a better place. Later there was a screening of short film named “Anamika” which was shot in the India’s biggest red light area Kamatipura in Mumbai which showed up the pain and anguish of the abducted girls who are forcefully thrown into the Sex Work. There by giving a message to the youth to wake up and reach the vulnerable people. The evening session was Doll Exhibition arranged by Ms. Francoise, which was very creative and innovative. The dolls were made based on the social realities of oppression and marginalization towards vulnerable section society. The vesper of the day was led by team Gideon.

The fourth day was themed under the topic Disability. The morning Bible Study was conducted by Rev. Christy Gananadason on the topic of disability with the biblical references from the book of Leviticus and gospels of John and Mark. There was an exposure out at the Liza’s home, a place for mentally and physically challenged women which is being run by Mrs. Molly Abraham and Rev. K.C. Abraham. There was an interaction with the mentally challenged people at Liza’s Home and the personal experiences and testimonials of the parents who face the challenges in their daily life. There was an interactive session in the afternoon with Mr. Chip Kingery from ProVision Asia,Bangalore, who explained about the disability with the biblical context. He brought out four points that Human beings are created in God’s image, created by God and for God, fearfully and wonderfully made and that God doesn’t make mistakes. The session was followed by an interactive sessionwithMr. Muni who was rescued from the Bangalore railway station by Mr. Chip Kingery. The session was an informative and first hand experience for the participants to interact with him about the life and challenges that he had faced being a disabled person neglected and discriminated by his family and  the society. The evening session was lively with Rev. David Selvaraj who led a session that gave the participants a new idea on how to depict the message shown in the imagery called as the Boal theatre initiated by Augusto Boal which is also known as theatre of the oppressed. The motivation of this genre of theatre is to allow the ‘spectator’ not as a mere spectator but to involve as a ‘spec-actor’ realizing the realities of the oppressed section of the society. Through this theatre of the oppressed, Rev. Selvaraj urged the campers to come out from being as mere spectators of the society towards oppressed society but to involve and act for the change. He further claimed that this theatre of the oppressed allows as a rehearsal for the revolution. The evening vesper was led by team Jephthah. After the dinner there was a cultural night where participants represented their cultures in the form of dances, songs and skits.

The fifth day started with a Bible Study by Rev. Ruben Manohar with the biblical text from Daniel 1. In the morning session there was an exposure to Home of Hope which was part of New Ark Mission run by Mr.Raja famously known as Auto Raja. Mr. Raja who has started his New Ark Mission for the destitute has three centres for Men, Women and Children. The campers visited the centres for women and children and had an interaction with the inmates knowing in which way they have been rescued, how are they leading the present life and what are they expecting from the society and church. The campers presented few action songs and later danced with them.The campers contributed money together and few rations were donated at the centre. The campers had a meaningful time with them at the centre seeing the realities of the society who are being left neglected and unwanted.In the afternoon the camperswere divided into four groups and shared their thoughts and made an action plan of what all a youth can do to inspire, educate, aware people about all these issues that have talked and discussed from the last four days from grassroot levels and using platforms to convey to the people.The campers believed that there should be an awareness among the youth both in the Church and outside the Church making them realize the social realities and educating the people to overcome from the social stigma of discrimination and prejudices towards the sexual minorities and the disabled people in order to bring Social Justice among them and for all. After the discussion and action plan session, the camp concluded with a vote of thanks rendered by Rev. Sweety Helen, Executive Secretary of Commission on Youth, NCCI and urged the campers to spread the awareness to all the youth for social change and justice. 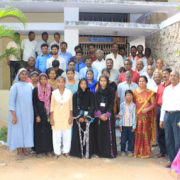 Interfaith Communities Dream a World Without Persons with Disabilities 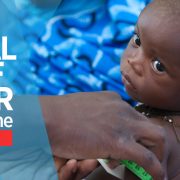 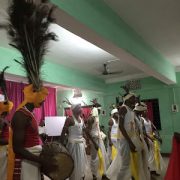 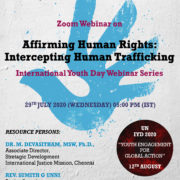